Education as a Path of Defense:
Arming the world with knowledge
-by Suzy Marselis

Could there be a war that doesn’t know defeated man? A peaceful fight, in which we all would win? Should that not be the only war we fight?

Wars are fought today, all around the world. Wars with winners and losers, but in the end even the winners lose so many. How to fight a war, how to live a life, how to change the mindset of the fighters, to a mindset of a peaceful battle?

Awareness is the key; creating the consciousness in humanity, for what is happening all around us, that for which everyone closes their eyes. We all live on the same planet, and there is only one earth, only one place we can live. As humanity, we all want to feel good, we want to feel at peace, we want to feel loved and we want to live without fear. But all around us, people are sad, being scared of the future, of their neighbors, for a paycheck that did not come in. So naturally, we want to defend ourselves and in history we chose often do to so with weapons. Weapons are very effective in ruining the opponent. But what is left after a war fought with weapons? A degraded land, families
ripped apart, societies broken, and even the winners turn out to have suffered great losses.

It is time to shift the mind, for once and for always. History has already shown that there is one way of defense that is harmless and actually beneficial for all parties: Education. Education starts when a problem, that seems to be unsolvable, is faced by making the ignorant knowledgeable. In a time where globalization is as prevalent as today, it is increasingly important to work together to fight the inequalities in the world. Only when we join our forces, in all that we have learned from the
past, we will be able to prevent the same from happening in the future.

We have so many past experiences and there is so much data available about humankind as a whole, but still we fail to learn fully from these experiences. Remember; how the native Americans were killed by the Europeans? And remember that the same thing happened to the natives of Australia? And to the natives of Latin America? How can we have let lives and entire cultures be lost over and over again? Remember how humans cut down most natural forest in Western Europe? Remember how they did the same to North America? And yet the western world is blaming the
Africans and Asians for cutting down their forest? We have no right to blame them. The only right we have is to share our past experiences and teach those that are ignorant and uninformed, by helping each other instead of blaming each other, by sharing the planet instead of trying to take as much for ourselves as we can.

With the vast amount of information available and the current technological infrastructure, it is becoming increasingly easy to spread knowledge around the world. Access to information and education should be a global human right, so that awareness can be created through educating the people and mindsets can be shifted. With education, people can actually help people and humanity can fight the war to live in peace on a healthy planet in which everyone wins.

The Tasajera Summer School project remains in Phase 1 – Community Engagement phase, and will move to Phase 2 – Program Development – on January 14, 2016. In accordance with the project action plan, the selection of “Learning Areas” was carried out by the local Committee of Information and Development. This update is about the challenges faced during Phase 1.

One of the most important principles in community development is also one of the most difficult to implement: “adopting local language”.

I am not talking about learning the language of the community, or adopting local customs for oneself, or agreeing to its religious and daily life practices. Adopting local language is to translate your message into local terminology, and to develop an ear to interpret local needs without biased filters. We can say that adopting “local language” is really the leveling of the communication field between the expert (external) and the community. This is easier said than done.

The first, somewhat obvious, step to adopting the local language is to be willing to listen. We developed a process to interview and survey people from different sectors of Tasajera community (e.g. tourism coop, church leaders, school teachers, youth reps, student parents) to find out what are their educational priorities; in other words, what they want to learn.

Figure 1 displays the Summer School model including 5 priority “learning areas” that were chosen by community representatives, 1 additional local request, and 1 external consideration. The next phase will involve recruiting volunteers who wish to participate or contribute in any of these learning areas. 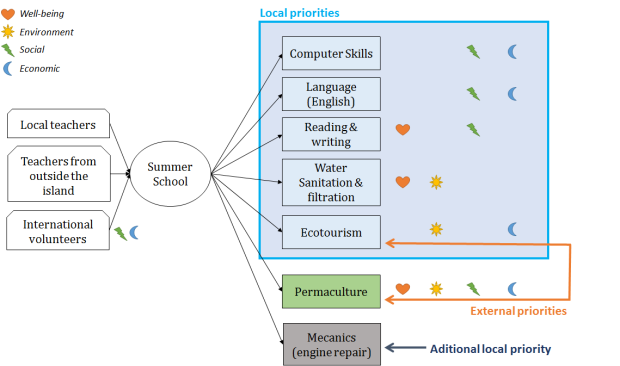 The second step of adopting local language is to process the information collected, and interpret the community’s selection. Why do the local community prioritize the need for such knowledge and education?

Perhaps the most important example of this in Tasajera is the Turtle Conservation hatchery. Started in 2006 with the help of USAID and conservation NGOs the local community started buying sea turtle eggs from “egg collectors” to stop the illegal market of turtle eggs for consumption. Today, the Turtle Hatchery is seen as one of the most important income sources in Tasajera. More than 200 families get benefited from it every season. It is common  to see dozens of people walking at night on the beach searching for turtles laying their eggs.

Local leaders and NGOs are developing strategies to market the conservation and liberation of turtles as a tourism activity that builds awareness and facilitates capital into the community.

The progress in Tasajera Island has been consistent, but a bit slow. This is not something negative, because community engagement should not be rushed; enough time should be allocated to engage with all people in the community. It is important to understand their issues, needs, and priorities.

I’ve been in El Salvador for one month now, and I believe I’ve learned a lot about the cultural and social issues affecting Tasajera. It is important to know the way they operate and how they’re organized. I concluded there is a lack of organizational capacity and poor self-governance within the community. Therefore, a multisectoral committee, under the authority of the Association for Community Development (ADESCO), has been called for. There are a few organizational traits the new committee must overcome, including dependency, information deficiency, and incentives.

Given the location of Tasajera Island at the lower Lempa River mangroves, there has been great interest in the protection and exploitation of the region. The lower Lempa River is a national protected area and a RAMSAR site. The protection of the biodiversity-rich mangroves has led many external actors to intervene with the small communities that inhabit the region. The relationship between the communities and outside funding sources has caused a side-effect of dependency. A culture of dependency has consequences on the organizational behavior of local actors; people expect to receive help with minimum effort on their side.

Some of the main external actors in the area are:

Unfortunately, Salvadorans are not known for their excellent management skills. People often get things done “no matter what”, but fail to keep good records of what was done. Tasajera works very similarly, and people don’t have a mid- or long-term perspective. As a result, they lack the capacity to measure their performance over time. It’s understandable too, because they have lived off the ocean for generations and fish seemed never to run out… until today.

Since one of the principles employed here is to build on local and already existing information structures, I’ve noticed there is some information among local actors. However, the available information is mostly written down on paper and is not being analyzed over time. This information includes:

In addition, there are some assessments of the community performed by universities and NGOs, but are focus-specific and not periodical. There is also Local Knowledge that may be recorded, like traditions and culture, and intriguing stories about young men and women who are migrating to the United States illegally.

Community leaders seem frustrated with community members because they say it’s hard to get the people organized to accomplish something. People are not very interested in making an effort or commit to investing time in organizing something. This may be as a result of the previous points on dependency and lack of capacity. Therefore, incentivizing adequate organization and goal-oriented projects is essential to any intervention that is meant to be sustainable.

Communication may be a very important aspect of this, as the benefits of “owning their development” may be explained in a more comprehensive way. Other ways to encourage participation need to be explored as the process goes on.